Teamsters Urge Ottawa to Find Solution to Rail Blockades as 6,000 Rail Workers Could be Laid Off

Laval, QC, February 13, 2020 – Teamsters Canada, the country’s largest union in the transportation sector, is calling on the federal government to intervene to find a solution to the blockades which have paralyzed the country’s rail network. This comes as Canadian National (CN) begins to shut down its rail network, potentially putting up to 6,000 workers at CN and other rail companies out of work. 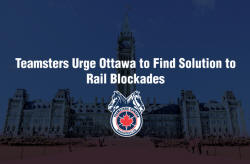 “These blockades are having a catastrophic impact on ordinary, working-class Canadians who have nothing to do with the Coastal Gaslink pipeline. Hundreds of our members have been out of work close to week. Now up to 6,000 of our members risk not being able to support their families or make ends meet this month, and they are powerless to do anything about it,” said the national president of Teamsters Canada, François Laporte.

“Our union – and thousands of working families – are in crisis. This situation cannot go on forever. We urge Ottawa to intervene to help find a solution as soon as possible,” added the union leader.

Teamsters represent close to 125,000 workers in Canada in all industries, including over 16,000 in the rail sector. The International Brotherhood of Teamsters, with which Teamsters Canada is affiliated, has 1.4 million members in North America.