Brothers and Sisters, With the assistance of Niki Ashton MP, we have launched a parliamentary petition requesting government to take action and launch a RCMP investigation into the tragic accident on Field Hill that claimed the lives of our Brothers, Andy Dockrell, Dylan Paradis and Daniel Waldenberger-Bulmer on February 4, 2019. 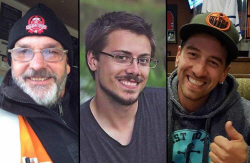 Please take the time to sign this petition and share widely throughout your networks and encourage signatures so we can send a strong message to Parliament.

Thank you in advance, I truly appreciate any support you can provide.

e-3024 Petition to the Government of Canada

We, the undersigned, Citizens of Canada, call upon the Government of Canada to launch a full and independent criminal investigation into the deadly derailment of CP Train 301.