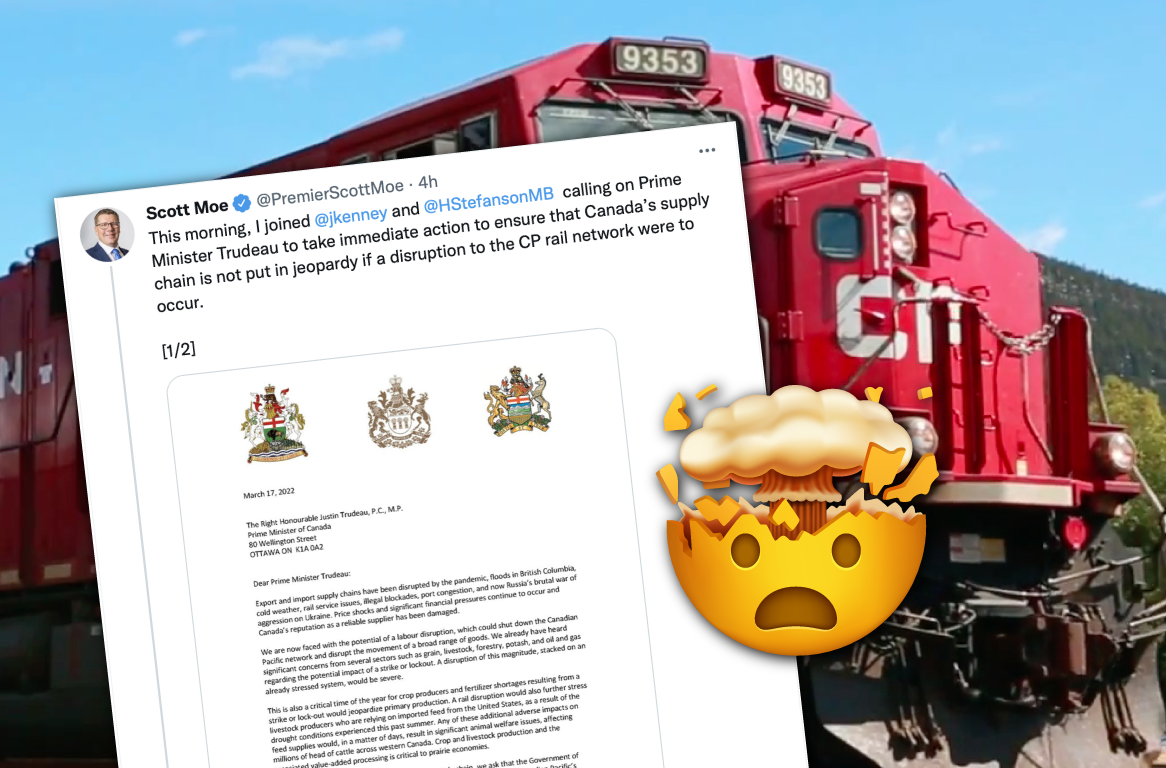 Calgary, March 18, 2022 – Scott Moe called on Ottawa to intervene in the event of a strike at Canadian Pacific Railway (CPR), which he said would be “catastrophic” for Saskatchewan. He has launched a petition asking the government to pass back-to-work legislation if workers walk out.

The politician conveniently forgets to mention that it was CPR that announced the lockout of its 3,000 workers. Therefore, it is the rail carrier’s management that is threatening the supply chain, the Canadian economy, tens of thousands of jobs and hundreds of businesses that depend on the rail system, not the Teamsters Union.

Unlike the rail carrier, the Teamsters Canada Rail Conference (TCRC) has repeatedly expressed its desire to pursue negotiations.

“I want to remind everyone that only last month, Scott Moe chose to support a minority of professional truck drivers who used our roads and bridges to illegally block trade routes with our largest partner, the United States,” said TCRC President Lyndon Isaak. “These blockades completely shut down border crossings and prevented workers and members of the Canadian public, who were complying with the mandatory vaccine mandate, from crossing the Canada/U.S. border,”

“Conversely, Scott Moe condemns legal strike action in advance,” the union leader added. “A strike is a legitimate process enshrined in the Canada Labour Code. In Canada, free, collective bargaining, which includes legal strikes, has advanced the conditions of many workers and continues to ensure development of society in general. This was broadly demonstrated in the pandemic, where there was an increased loss of non-unionized jobs,”

“Moe’s public intervention on the CPR labour dispute reflects his disdain for the collective bargaining process and ignorance of the issues at hand. He is showing shameful disregard for the 1,200 tax-paying railroaders from Saskatchewan, many of which are included in the 3,000 represented in these current negotiations. We need a Premier who represents all Saskatchewan residents,” Isaak concluded.

After a never-ending pandemic, exploding commodity prices and the war in Ukraine, this lockout adds an unnecessary layer of insecurity for many Canadians. CP’s irresponsibility with regards to the continuity of Canada’s supply chain should be taken to task.

The Teamsters Union represents the interests of 125,000 members in Canada, 16,000 of whom work in rail transportation. They are affiliated with the International Brotherhood of Teamsters, which has 1.4 million members in North America.