Sadly, we received the news this morning that Brother Jasvinder Riar, while at work as a Yard Conductor in Thornton Yard in the Greater Vancouver Terminal, was fatally injured in the performance of his duties. Brother Riar was 32 years old and a member of Teamsters Canada Rail Conference. He was married and had a 9-month-old son. Brother Riar was well respected by his peers and was known for being a good worker and railroader. 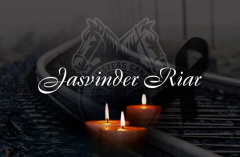 The incident is currently under investigation by the Transportation Safety Board (TSB) along with Transport Canada and the local Health and Safety Committee. Until further details are available the TCRC will not be making any additional comment.

We extend our condolences to Brother Riar's family, friends and co-workers. Our thoughts are with them.