Dear Brothers and Sisters, On April 28th, please join with us in remembering our brothers and sisters who have been killed, injured or suffered illness as a result of work-related incidents. We also honour the families and friends who have been deeply affected by these tragedies. In addition to remembrance we must all take this opportunity to renew our commitment to health and safety and continue the fight to end these senseless tragedies. 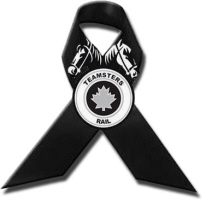 On April 28, 2018, in addition to our previously fallen brothers and sisters we remembered the lives of Brother Dimitrios Bakertzis and Sister Melissa Heins taken from us in 2017, while keeping them in our hearts this past year has seen more tragedies beset upon our membership.

On September 15, 2018, a train derailment in Northern Manitoba took the life of Brother Kevin Anderson and critically injured the locomotive engineer.

On November 19, 2018, Brother Tony Nenasheff was fatally injured when he was struck by a movement in an adjacent track to the train he was working, in downtown Calgary, AB.

On December 4, 2018, Brother Pierre-Luc Levesque a conductor/foreman trainee passed away from injuries sustained during switching activities in Edmundston, NB.

And, on February 4, 2019, a runaway train and subsequent derailment near Field, BC claimed the lives of Brother Andrew Dockrell, Brother Dylan Paradis and Brother Daniel Robert Waldenberger-Bulmer.

In Canada, each year over 900 workers are killed and over 250,000 claims are filed for lost time injuries/diseases according to the Association of Workers’ Compensation Boards of Canada. All accidents are preventable and the TCRC is committed to advocating for improved safety to put an end to these senseless tragedies.

The National Day of Mourning commemorates workers who have been killed, injured or suffered illness due to workplace related hazards and incidents. In 1985, the Canadian Labour Congress (CLC) declared April 28th as an annual day of remembrance and in December 1990, parliament passed the Workers Mourning Day Act proclaiming April 28th an official Workers’ Mourning Day.

Since its inception, the observance has spread to over 80 countries around the world but is known in most other countries as the Workers’ Memorial Day. In 2001, the International Labour Organization (ILO), a specialized agency of the United Nations, observed this date as World Day for Safety and Health at Work. April 28th was chosen because on that date in 1914 the first Workers Compensation Act in Canada became law.

The Canadian flag on Parliament Hill will be flown at half-mast and workers around the country will observe this day by lighting candles, donning ribbons and black armbands, and observing moments of silence.

We will be requesting that the carriers acknowledge the Day of Mourning by issuing a bulletin and providing our members the opportunity to observe a moment of silence where operational duties allow. Please encourage your members that are not working to attend one of the many ceremonies taking place across the country; you can contact your local labour council for details.

We have provided your division legislative representative with a supply of lapel pins with our logo wrapped in a black ribbon and we ask you share these with your members at your division meeting to wear on the Day of Mourning and throughout the year as a symbol of remembrance and a personal commitment to health and safety.

In addition to the pins, we are also supplying your division with Right to Refuse wallet cards for a quick reference should anyone be faced with a situation they consider an immediate threat to their health and safety and need to invoke their right to this protection.

Although the law demands your employer provide protection from danger and hazards arising out of, linked with or occurring in the course of employment, our membership needs to ensure their personal safety is protected by considering the potential consequences in every action and decision they make both on the job and at home.