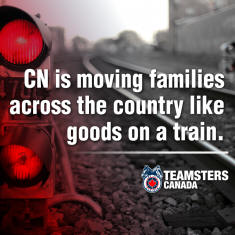 The company has already begun transferring twenty RTC positions to Edmonton. The workers in question had just been transferred to Montreal from Toronto this year.

“CN is moving families across the country like goods on a train. Some of these families had just found schools and daycares for their children in Montreal. You can’t play with people’s lives like that,” said the president of Teamsters Canada, François Laporte.

“Uprooting families, some for the second time this year, likely means many RTCs will be unwilling to make the move. Leaving their communities, relatives, language and culture behind may not be an option for many of them,” explained the president of the TCRC, Lyndon Isaak. “CN will end up losing experienced staff and their knowledge of the rail network, which could lead to dangerous situations for railroaders, track maintenance crews and the general public.”