Laval, QC, January 26, 2021 – Today, the Transportation Safety Board (TSB) released its report into the accident which took the life of Brother Pierre-Luc Levesque, a CN conductor/foreman trainee, in Edmundston, New Brunswick, on December 4, 2018. 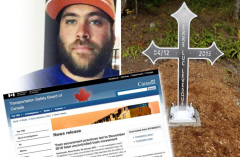 Lyndon Isaak, president of the Teamsters Canada Rail Conference (TCRC), made this statement on the report:

“The issues raised in the TSB report into Brother Levesque’s death are symptomatic of the shortfalls in Canada’s rail sector safety culture. The focus on profits and efficiency over safety must change. Every accident is preventable but after 13 fatalities in three years, it appears evident to our union that the rail carriers and regulators lack the commitment to take the necessary actions to prevent these tragedies.

“I did not know Brother Levesque personally, but I am told he was a 33-year-old proud father of two who loved his job and spoke about it often. My heart once again goes out to his family, friends and co-workers. The Teamsters will never stop fighting to put an end to these senseless tragedies.

“We will not be making further comments until we have had time to fully analyze the content of the TSB report, and the recommendations for rail operations throughout the country.”