On Wednesday, September 6th, Emma Mogus (Daughter of TCRC Member Ed Mogus) was featured on the Jimmy Fallon show during the "Fallonventions" spot. She recently won science prize for creating and building a computer mouse that is controlled by the tongue. The TCRC would like to congratulate Emma on her incredible ingenuity!

'mouse inside your mouth' 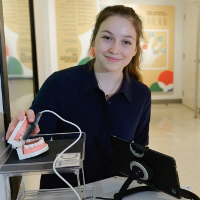 An Ontario teen has won a $2,000 science prize for creating and building a computer mouse that is controlled by the tongue.

Emma Mogus, 17, from Oakville, built the TiC, or Tongue-Interface-Communication. There are five buttons inside a mouthguard-type device, which is connected to a computer. Each button controls a different mouse direction.

"By using your tongue to press the centre button, for instance, it's 'enter,'" explains Mogus.

The other buttons are left, right, up and down.

"You can think of it as a mouse inside your mouth."

Her invention won her the 2016 Weston Youth Innovation Award from the Ontario Science Centre.

Mogus said the TiC allows people with conditions that limit their physical movements — such as ALS, multiple sclerosis, and spinal cord injuries — to use computers.

And since many computers have on-screen keyboards, the person wearing it could also use the TiC to type out an email, or search for something on Google.

Inspired by friend with ALS 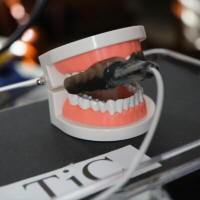 Mogus said her friend Tim, a husband and father who has ALS, inspired her to create the device. His wife told Mogus that he was having more and more difficulty communicating verbally.

"Your tongue is connected almost directly to your brain, so it nearly bypasses your entire spinal cord, so in these injuries your tongue is left unaffected," she said.

Also, Mogus learned that the tongue doesn't really get tired, and it's capable of complex movement.

Tested on herself and siblings

She said there are other types of devices that help people with limited movement, but they're not always ideal — some of them make use of a tongue piercing in the user, while others make use of breath and eye movement.

"But unfortunately they can be susceptible to involuntary movement, so it's much easier to accidentally look a certain way or to breathe too heavily and to activate an undesired command."

Mogus wanted to make something that would eliminate those errors.

The self-taught teen said it took her about three years to get to her latest prototype. She did a lot of testing on herself, and also bribed her younger siblings with candy to get them to test it.

"It uses a low voltage — it's only 3.3 volts — so there's no real risk [of getting injured]. But the tactile switches that are sticking out and kind of cutting the corner of your mouth — all these things I've learned along the way have led to my device today," she said.

Her next step is to test with people like her friend, Tim, but she wants to wait until she'd done some more work on it. She's looking into making the device wireless, and also into replacing the mouth guard with some kind of retainer.

She's also researching patents, with the goal of making a product that's affordable for those who need it.