The chief RTC ignored pleas from the conductor, a railroader with over 30 years experience, that he and the locomotive engineer are too fatigued and are unfit to operate a train. The workers had notified CN hours earlier of their need to be relieved by another crew and to rest. The conductor ultimately did not move the train and was suspended for 14 days without pay as a result.

CN’s blatant disregard for the health and safety 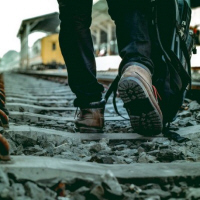 “This recording illustrates CN’s blatant disregard for the health and safety of our members and the public,” said the president of Teamsters Canada, François Laporte. “This is why we are on strike against CN. This happens every day across the rail industry, and CN regularly intimidates workers who raise the issue of fatigue with the threat of discipline.”

The incident occurred on October 19, 2018 near Pickering, Ontario. CN would have wanted the fatigued train crew to continue working for several hours, operating a locomotive uphill through residential areas east of Toronto.

The conductor is heard asking the chief RTC to contact Transport Canada, which was never done to the union’s knowledge. The chief RTC simply said that “rest is not a regulatory or safety issue.”

“We’ve lost nine of our members in the rail industry over the past 24 months, including three from the group currently on strike at CN,” added Laporte. “The rail industry is in crisis, and CN need to work with the Teamsters to address this.”

Negotiations between the Teamsters and CN have been ongoing over the weekend. The company is refusing to budge on the key health and safety issues that the union has identified.

“Instead of bargaining in good faith, CN is obviously trying to prolong this labour dispute, add fuel to the fire and turn the public against workers who just a safe work environment,” said Laporte.

Teamsters want CN to make it easier for rail workers to be rested, without fear of discipline. The union also wants the company to adjust some of its operating practices in the interest of safety.