Laval, QC, June 16, 2020 – A Canadian National (CN) conductor was fatally injured yesterday afternoon while working just outside of a rail yard in Prince Rupert, B.C. The worker was a man in his thirties who had been with the company since 2018. His name is not being released. 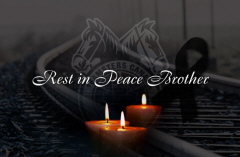 “On behalf of Canada’s over 125,000 Teamster members, I would like to extend our deepest condolences to our fallen brother’s loved ones and colleagues,” said the national president of Teamsters Canada, François Laporte. “Incidents like these are never acceptable. Every accident, every fatality is preventable.”

This is the second CN conductor to die on the job this month in B.C. Another conductor died on June 1 in Surrey.

Both workers were performing “switching operations,” a term that refers to activities like making up and marshalling trains, storing cars, serving industries within rail terminals, and other related activities.

A total of twelve railroaders have died on the job in the past two and a half years.

The deceased worker was a member of the Teamsters Canada Rail Conference (TCRC), the largest rail union in the country.

“This industry has suffered far too many preventable tragedies. We need to find new ways to focus on safety.  Our union continues to work with employers, the federal government and other stakeholders in hopes of preventing future accidents and ultimately saving lives,” said the president of the TCRC, Lyndon Isaak.

“In the meantime, we remind all our members to stay vigilant and aware of their surroundings at all times while at work,” added Isaak.

Out of respect for the victim’s loved ones, the Teamsters will make no further comment at this time.