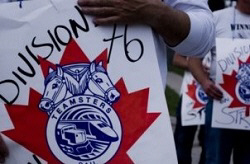 CP’s profit in 2017 reached $2.4-billion, up by $1-billion since 2014, even as sales were little changed over the same period. Rising profits despite stagnant sales can be attributed to cuts, layoffs, closures, and punitive discipline. CP also forces train crews to be available 24/7 while pushing them to work well beyond their point of exhaustion.

“Despite our best efforts to negotiate in good faith, we have come to a point where Teamsters are prepared to go on strike for the third time in six years to obtain a fair and reasonable contract renewal,” explained Doug Finnson, President, TCRC. “We will do everything in our power to reach a negotiated settlement at CP, but one that is acceptable to our members and that addresses the major issues that exist with this employer.”

This has led to a backlog of many thousands of grievances at the company, and to Transport Canada labelling crew fatigue at CP as an “immediate threat” to rail safety.

CP acknowledged in 2017 that their actions created a rift with their workers.

The previous collective agreement with CP expired on December 31, 2017. Negotiations began on November 16, 2017, and federal mediators were brought in on January 29, 2018.