A Combination of Factors

GATINEAU, QC, Feb. 23, 2018 /CNW/ - The Transportation Safety Board of Canada  released today its investigation report (R17H0015) on a collision between a school bus and a train at a railway crossing near Colborne, Ontario. The investigation examined the requirement for school buses to stop at all railway crossings, driver practices, winter tire performance data, and deficiencies in company procedures for railway crossing emergencies.

2017 collision between a school bus and a train near Colborne 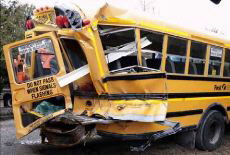 On 13 February 2017, a Canadian Pacific freight train, travelling eastward on the Belleville Subdivision, struck a school bus that became immobilized at the Town Line Road public crossing near Colborne, Ontario. The crossing was equipped with flashing lights and a bell. Prior to the collision, the school bus driver and two occupants exited the bus and were standing a safe distance away. The bus and a signal mast on the north side of the tracks were destroyed. The locomotive sustained minor damage.

The investigation found that, after stopping as required at the railway crossing, the bus became immobilized when the driver slowed the bus to look both ways a second time while driving over the crossing. Given that the bus had previously come to a stop and that snow had accumulated on the road, the rear tires could not provide the traction required to propel the bus up the incline. The driver believed that crossing slowly and looking in both directions once on the tracks was safer, despite company training instructions to move quickly and without hesitation across the tracks. Yearly company evaluations did not identify the driver's practice of reducing speed when travelling over crossings.

Many jurisdictions require school buses to stop in advance of all railway crossings, even when crossing warning systems such as bells and lights are not activated. Although this is believed to improve safety, there have been a number of recent accidents where a school bus stopped in advance of a crossing protected by warning systems, continued onto the crossing, and then was struck by an oncoming train. A 1985 study had determined that there would be a decrease in bus-train accidents if stopping wasn't required. However, in the absence of up-to-date risk analysis to determine whether buses should stop at railway crossings, even when warning devices are not activated, there is a risk of railway crossing safety not being optimized. As part of its investigation (R13T0192) into a fatal collision between a public transit bus and a VIA Rail Canada train in Ottawa, Ontario, the Board expressed its concern that, without a comprehensive study that deals with the risks associated with all buses stopping at all railway crossings, decision makers may not make the best choices possible to ensure an adequate level of safety.

At the time of this occurrence, there were no regulatory or industry standards to evaluate school bus tire traction test results, similar to those for passenger vehicles or light trucks, to determine which tires were most suitable for winter driving. As such, bus operators relied on their experience and information from tire manufacturers. If school bus operators do not have access to independent and objective assessments of winter tire performance, there is an increased risk that the most suitable winter tire will not always be chosen.

The TSB is an independent agency that investigates marine, pipeline, railway and aviation transportation occurrences. Its sole aim is the advancement of transportation safety. It is not the function of the Board to assign fault or determine civil or criminal liability.

SOURCE Transportation Safety Board of Canada