CBC News Posted: Jul 29, 2017  - Prime Minister Justin Trudeau says the company that owns the rail line serving the northern Manitoba town of Churchill must repair the washed-out tracks that have been out of commission since May.

“We agreed that Omnitrax needs to be held to account and that we need to act to support the people of Churchill," Trudeau said.

Denver-based Omnitrax has said it won't pay to repair the tracks, which were damaged by severe flooding. It has asked the federal and provincial governments for help.

"Omnitrax has legal obligations to clean up and repair the tracks," Trudeau told a news conference at Winnipeg's Assiniboine Park Saturday morning. "This is a responsibility that is squarely on the shoulders of Omnitrax."

But the prime minister wouldn't say whether he planned to pursue legal action against the company.

Earlier Saturday, Trudeau had sat down with Manitoba Premier Brian Pallister to discuss a range of topics, including the Churchill rail line, at a closed-door meeting. The two have clashed in the past several months over a range of issues, including the federal government's carbon-reduction strategy and funding for health care. 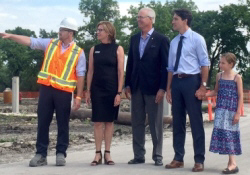 "I had a very productive conversation with Premier Pallister this morning, where we agreed that Omnitrax needs to be held to account and that we need to act to support the people of Churchill," Trudeau said.

Speaking to reporters after the meeting, Pallister said the province and federal government didn't arrive at any firm commitment on how to repair the rail line, which is Churchill's only land link to the rest of the province.

It is critical both for getting supplies to the town of 900 people and for allowing residents of Churchill to travel, as the only alternative is more expensive air travel.

"We're really asking for clarity around Ottawa's intentions on Churchill, of course, because we know that that is a federal issue and it is one that we need to address together for the future security of the people of that area," he said.

Trudeau spoke with Churchill Mayor Mike Spence in a phone call Friday night. "The mayor was clear in our conversation last night that there needs to be immediate action if we're going to restore the rail lines in time for winter," Trudeau said.

Spence told CBC News he's pleased that Churchill was a priority for the two leaders in their discussion, but now they need to take action to fix the rail line.

"If the rail line owner is not, can't undertake the repairs. then they need to step aside and have somebody else do the repairs and we're hoping that the governments will initiate that," he said. "How they do it is totally up to them."

Both the federal and provincial governments have invested millions in the rail line and port, which Omnitrax also owns, and that places some legal obligations on the company, Spence said. The prime minister indicated that Ottawa will "use what they have" to get the rail line up and running, Spence said.

Omnitrax estimates the cost of the repairs at between $20 million and $60 million.

The rail line was once federally owned, but was sold to Omnitrax in 1997.