May 13, 2017 CBC News: A Canadian Pacific Railway train derailed in Bawlf, Alta., on Saturday morning — the second time the same train has derailed in two days.

cause is under investigation

The train derailed in Bawlf — about 25 kilometres southeast of Camrose — just before 10 a.m., CP spokesperson Jeremy Berry said in an email. On Friday, the same train derailed eight kilometres east of Wilkie, Sask. at around 12:30 p.m., Chris Krepski from the Transportation Safety Board of Canada (TSB) confirmed Saturday.

In Bawlf, 29 cars loaded with potash derailed. Near Wilkie, 25 cars with potash went off the track.

No one was injured and there is no threat to public safety in either crash.

CP spokesperson Salem Woodrow told CBC Saturday the two incidents were unrelated but the locomotives and some of the train cars are the same in both incidents.

Re-railing and the removal of cars involved in the Bawlf incident was completed Sunday morning, Woodrow said in an email.

Crews are now repairing the track's infrastructure and the rail line will reopen once all repairs and safety inspections are completed. 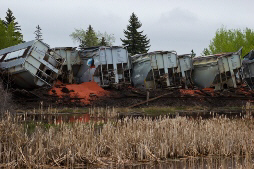 The Bawlf derailment blocked the crossing at Range Road 18 by Highway 13 east, but has since reopened.

RCMP are assisting at the scene, and the cause of the derailment is under investigation.

"CP takes this incident extremely seriously and has enacted its emergency response processes," Berry said. "Crews and equipment have been deployed to the site."

On Saturday, Krepski said the TSB has one investigator on scene with a second on the way. More information on the derailments will be available in the coming days, Krepski added.

"It sounded like an explosion," Kelch said. "I heard it crystal-clear."

The vibrations were so strong they knocked over a soap dispenser in her store, she added.

Kelch and her family worked through the afternoon to prepare soup and dozens of sandwiches for workers clearing the track.

"It's a little bit of excitement for Bawlf," she said with a laugh.