in final year at CP Rail 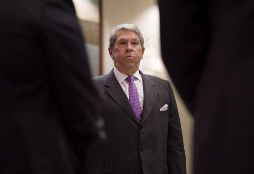 Mr. Harrison left CP at the end of January and was recently named CEO of CSX Corp. He forfeited $123-million in compensation and pension by leaving CP before the end of his contract. He is asking CSX shareholders to reimburse most of this amount or he will resign from the Florida-based railway.

Since his arrival at CP in 2012, Mr. Harrison has been among the highest paid CEOs in Canada. The average pay for a Canadian CEO, including benefits, stock options and bonuses, is $12-million, according to a Bloomberg study released in November.

Read more: Canadian Pacific: The turmoil behind the turnaround

Shareholders have seen returns of 150 per cent under Mr. Harrison's leadership, and profit has tripled at the Calgary-based company once considered an industry laggard.

CP said in its proxy circular released on Wednesday night that it is changing the way it pays executives, after facing criticism from major shareholders for failing to properly align executive pay with performance. Shareholders last year narrowly voted against the company's pay practices in a so-called say-on-pay ballot.

In response, CP says it is making several changes to its compensation plan, including removing the operating ratio as a measurement in the long-term incentive plan and adding a rail safety measure to the short-term incentive plan. "Shareholders would like to see safety and other operational measures formally incorporated into executive compensation," the company said.

New CEO Mr. Creel's use of the company jet will be restricted to business and family visits in the United States, and he will be paid "in line with the market and our peers," CP said.