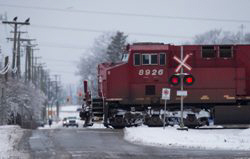 The failure to ratify the deal means CP's 3,000 locomotive engineers, conductors and yard workers will be without a collective agreement on Jan. 1.

Doug Finnson, president of Teamsters Canada Rail Conference, said it is too soon to say why his members rejected the deal, which included a raise of about 2 per cent and, in a couple of regions, implemented work schedules designed to combat fatigue. He said he is optimistic the two sides will reach an agreement his members will support when talks resume at a date that has yet to be picked.

Sixty-seven per cent of votes cast by union members rejected the deal. Of the 3,050 ballots sent to members, 1,725 were cast.

"The membership said no – overwhelmingly said no – so we're going to go back and discuss it with our people and identify the reasons and head back in and … negotiate with CP and see if we can address all the issues," Mr. Finnson said by phone.

Mr. Creel became CP's CEO in January and said he wanted to end the acrimony with the Teamsters members.

Management held several meetings with Mr. Finnson and other union leaders and rolled out a disciplinary system intended to reduce the number of suspensions and firings for minor safety violations in an attempt to smooth the "feathers that have been ruffled" under his mentor and predecessor, Hunter Harrison.

Mr. Creel said part of that effort was his offer to extend the Teamsters' contract for one year.

"When I took this job over, we've not had the best relationship, in all fairness," Mr. Creel said on a conference call with analysts in July.

Mr. Creel said he offered to extend the current collective bargaining agreement for 12 months "to give us time to build some trust between the parties." He said CP wanted to implement some work schedules for train and yard crews and needed time to discuss the changes with union leaders. "[T]he relationship's improving," Mr. Creel said.

CP did not respond to an interview request.

A Globe and Mail investigation into labour relations at CP published in March revealed a workplace marked by low morale, harsh discipline and firings for seemingly minor incidents. Between 2012 and 2016, with Mr. Harrison as CEO, the number of grievances over firings soared to an average of 23 a year from five in the previous 10 years. Almost all dismissals were overturned by an arbitrator.

In a statement, CP said it is "disappointed" with the rejection. "We remain optimistic that we can come to a mutually beneficial agreement with the [Teamsters] – an agreement that meets the needs of our Canadian conductors and engineers as well as our customers and shareholders," said the statement, attributed to Mr. Creel.

The contract extension rejected by the Teamsters included new provisions that would address "scheduling, fatigue and the current backlog of disputes between the parties,"' CP said in September. Mr. Creel said on Oct. 17 he expected a "strong 'for' vote."

However, there were signals CP faced a difficult task in ending years of fractious ties. Mr. Creel's successful push for legislation that will allow in-cab cameras aimed at train crews angered the Teamsters leaders, who called it a violation of members' privacy.