To all Railway Union Members: Together the Teamsters Canada Rail Conference and Teamsters Canada form the strongest Rail Union in Canada. On December 12, 2016, the IAM who represent shopcraft workers at AMT informed the employer that the IAM considers that it would also be representing Locomotive Engineers and Conductors that are currently represented by the TCRC. We disagree with that.

We do not accept their interference in our rights and the rights of our members, and we have responded. 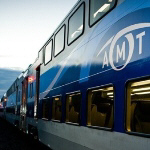 With the full support of Teamsters Canada, and only after exhausting every effort to work along side the IAM at AMT, the TCRC initiated action to protect the representational rights of our current members. Sometimes the best defense is a strong offence.

The TCRC was prepared and offered to work side by side with the IAM at AMT. Instead the IAM has attempted to assert that they will represent the TCRC members that work on the trains at AMT. We do not accept their interference in our rights and the rights of our members, and we have responded.

We will also be taking action with the Federal and Provincial Labour Boards as required to ensure that our members’ rights are protected and they receive the best possible representation during the period when both CP and CN try and divest this operation and as operations commence with Bombardier.

The Teamsters in Canada are strong and united and acting as one in this matter.

Sincerely and in Solidarity,